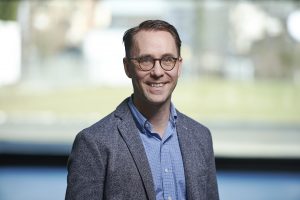 The 2020 KINGFA Young Investigator Award winner is Dr. Gustav Nyström, Head of Laboratory for Cellulose & Wood Materials, Empa – Swiss Federal Laboratories for Materials Science and Technology. Dr. Nyström has made significant contributions mainly within the field of nanocellulose but also within the field of amyloid fibril self-assembly and amyloid based functional materials.

His work on the single particle structure of nanocellulose has revealed new structural information about the cellulose nanofibrils, including how these particles twist in a right-handed fashion and how they break as a result of mechanical or chemical action. Dr. Nyström’s work on the assembly of nanocellulose into liquid crystal and gels has resulted in new fundamental knowledge on how the chirality of the single fibril translates to the chirality of the liquid crystal phase and how, based on the interactions between fibrils, kinetically trapped solid phases of nanocellulose can be characterized as colloidal glasses or gels.

He has also successfully demonstrated the use of nanocellulose in diverse applications, including energy storage and nanocellulose foams. Dr. Nyström’s research focus also include amyloid fibrils. Most notably, he discovered cholesteric phase in amyloids as well as improved our understanding of how local confinement of amyloid fibrils in small droplets control the resulting liquid crystalline phases in this system.

As the recipient of this award, Dr. Nyström will receive $1,500 and a plaque, to be given at the 2021 CELL Division Awards Banquet in San Antonio, TX.